Should we eat red meat? The nutrition and the ethics 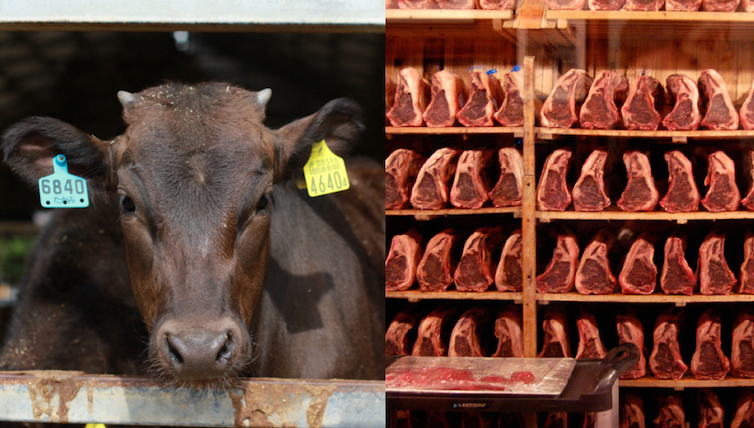 There are lots of things to consider when pondering whether we should eat red meat.
Guilio Nepi/Japanexperterna.se/Flickr, CC BY-SA

Many types of red meat and red meat products are available, from farmers’ markets, to supermarkets, to restaurants. The impacts of their production and consumption on human health, animal welfare and the environment are complex.

So what should we be thinking about when we’re deciding whether or not to eat red meat?

Consuming lean products and different cuts, or muscles, of meat from cattle, sheep, pig, goat and kangaroo is recommended in the Australian Dietary Guidelines as part of a balanced diet. Lean refers to animal muscle tissue that has lower amounts of total fat and saturated fat compared to higher-fat alternatives.

Most lean red meats are cuts, rather than processed products such as hot dogs or canned meat. Cuts provide many beneficial nutrients, including: protein, vitamin B12, zinc, iron and unsaturated fat (such as omega-3 polyunsaturated fats).

Australian livestock is mostly grass-fed in fields, rather than grain-fed in feedlots. This is better for both nutrient levels in the meat and animal and environmental ethics. Feedlots are more common in the United States, for example.

The type of grain that is fed to an animal affects its muscle nutrient composition, as well as shelf-life, taste, colour and quality. For example, pigs can be fed on a certain amount and type of linseed to increase omega-3 polyunsaturated fat in their meat.

The links between red meat products and human health are not fully understood, but you may have seen recent media reports about processed meat and cancer risk.

The ethics of consuming food, including animal produce, is a fraught topic for both animal welfare and environmental damage. The vast scale of commercialised livestock production is overwhelming.

Yes, any food that humans consume comes with consequences, especially when that food is mass-produced. However, with red meat, efficiency and cost can outweigh animal welfare when animals become “a commodity, a unit in the production line”. And there is huge environmental damage from livestock production, such as methane from manure and enteric fermentation (that is, farts!).

The Food and Agriculture Organisation of the United Nations stated in 2006:

The livestock sector emerges as one of the top two or three most significant contributors to the most serious environmental problems, at every scale from local to global.

It must be hoped the animal welfare and environmental aspects of food consumption will be highlighted in future revisions of the Australian Dietary Guidelines.

What can you do?

You probably care about your health, and hopefully you care about other animals and the environment. Luckily, you can do a few things to try to improve all of these aspects of red meat and red meat product consumption:

This article is republished from The Conversation under a Creative Commons license. Read the original article.